Redefining the art of investing from striving for positive alpha to avoiding negative alpha.

In evaluating investment returns, a distinction is often made between two types of sources of returns: alpha versus beta. In short, alpha stands for skill, whereas beta stands for risk premiums given by the market. Since investors are supposed to seek alpha, or at least not to pay for beta, investment managers are encouraged to present their performance as alpha. Preferably 'pure alpha'.

We think this concept is fundamentally flawed. In effect, alpha is no more than the outcome of a linear regression. Delving a little deeper, one will see that most alpha presented by managers can be attributed to model misspecification. That’s why we choose to take a radical stance in this discussion:

The only source of (positive) returns is beta. And since ultimately risk premiums are the only sustainable source of investment returns, at the basis of every source of beta, there is one (or more) source of risk. If all sources of beta are properly taken into account, the only alpha remaining will be a negative alpha, resulting from inefficiencies in capturing the beta aimed for.

Some sources of beta are harder to capture than others. Or, to put it differently, the harder-to-capture types of beta require more skill than the easily-captured types of beta. But despite the skill required, it all remains beta.

In this article we will provide reasoning for this alternative approach, demonstrating the healthy foundation of this basic thought and highlighting its relevance for investment decisions. Essentially, this alternative concept redefines the art of investing from striving for positive alpha to avoiding negative alpha. And this is not just a matter of terminology.

While the general idea behind the standard distinction between alpha and beta may be theoretically sound, in practice, it comes down to a simple linear regression, with alpha being the intercept. So, statistically, alpha signifies the average performance insofar as not explained linearly by the beta factors incorporated in the model. Before attributing this to 'skill', one should consider whether there could be any alternative explanation.

We can illustrate this with a simple, hypothetical example. Suppose an investment manager offers two different programs: a ‘U.S. equity program’ benchmarked against the S&P 500, and a ‘U.S. technology program’ benchmarked against the Nasdaq. As shown by the graphs below, in both these programs, the manager has demonstrated its ability to add some alpha. Can this be attributed to skill? 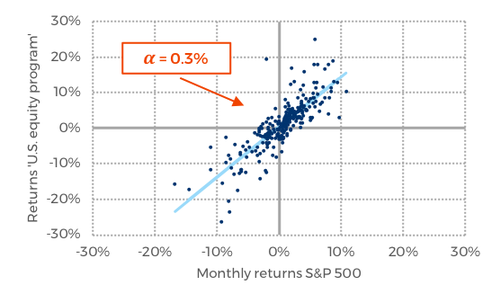 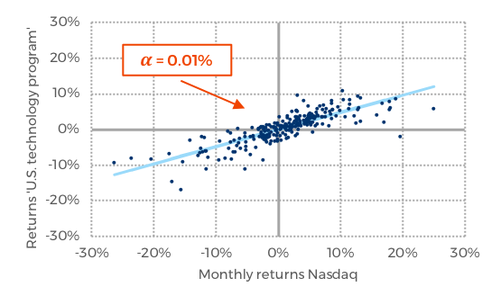 This is an example of misspecification alpha. Such alpha automatically results when the correct beta-factor is not included in the model. Or when not all relevant beta-factors are included. For instance, when an investment manager claims to invest in stocks but instead invests part of their capital with another profitable strategy, then a regression model without this other driver will 'reward' the investment manager with a positive alpha. Especially when the returns from this other driver are low-correlated with those of the claimed strategy, such alpha can be significantly larger than in the example above with two highly correlated stock indices. The graph below shows the ‘alpha’ of an ‘S&P 500 investment’ in which half of the funds is actually invested in bonds.

Of course, there is nothing wrong when an investment manager taps returns from other, uncorrelated, sources. But we believe the manager should be transparent about this alternative source of return rather than passing it off as skill. If only because this other source of return is based on another source of risk that the ultimate investor would want to be made aware of.

Another type of misspecification alpha results when the returns actually have a non-linear dependence on the beta-factor included. The graph below shows the returns of a strategy that has a concave relationship with the returns of the S&P 500. Such a relationship will for instance result when the investment manager writes options as part of its strategy. Again, harvesting option premiums in itself can be a sustainable source of investment returns, but it shouldn’t be presented as skill. The ultimate investor deserves to be alerted that this alpha comes with a price tag – a potentially fat left-hand tail. 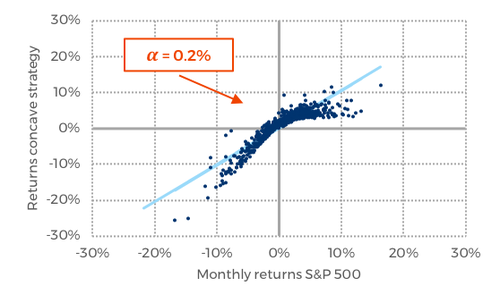 We believe that the scenarios described are far from hypothetical. We fear that the largest part of what is being offered to investors as alpha represents nothing more than misspecification alpha. Such alpha doesn’t really serve the ultimate investor. It will lead to disappointment and unpleasant surprises as soon as the investment gets hit by the occurrence of the unanticipated or underestimated risk factor. That’s why we adopt our alternative concept for distinguishing between alpha and beta.

If one considers risk premiums to be the only sustainable, ultimate source of investment returns, rather than seeking alpha, one should try to avoid alpha. After all, it could very well be misspecification alpha. And if the relevant source of beta is not, or not properly, included in the model, how can one be sure that the investment manager is carefully managing the risks underlying this beta? For investment purposes, one should not seek doubtful skills, but fully responsible risk management, which is a skill as well. And a valuable one.

If one considers risk premiums to be the only sustainable, ultimate source of investment returns, rather than seeking alpha, one should try to avoid alpha.

So all relevant performance should be attributed to beta. All returns are offered to us by the market. Which definitely does not imply that all investment returns are for free. We should distinguish between easily-captured beta, such as the risk-free rate or the returns of a buy-and-hold strategy in global equities, and harder-to-capture beta such as those being targeted by many hedge funds. The high correlation between hedge funds applying the same style alone indicates that it is mainly beta being offered. Some call it 'active beta'.

Unfortunately, there is a caveat: although our alternative model is theoretically sound, to make calculations with it in practice is almost impossible. How to properly account for all relevant sources of beta in the model? How to measure a beta factor in an unbiased way? For investment strategies tracking an index, this is already problematic: as we have shown in our June 2018 article Beat the index, don’t beat the market, indices themselves will already incorporate some negative alpha caused by trackers’ actions. And for the harder-to-capture types of beta this problem becomes even more intricate. If these types of beta were easy to measure, they would probably be much easier to capture as well. However, these practical difficulties are no excuse for embracing the standard alpha-beta-model. It is better to admit model specification issues than it is to reward all model misspecification as alpha.

Does it make a difference?

On the one hand, we have the standard model, attributing returns to beta offered by the market with alpha as the cherry on top: the value added by the skill of the investment manager. On the other hand, there is our alternative model that attributes all potential return to beta offered by the market, dragged down by (negative) alpha caused by the manager’s inefficiency in capturing this beta. One could argue that the difference is just a matter of semantics, but we believe that this is a fundamental difference with important implications.

A nice way to illustrate these implications is by drawing an analogy. In our definition, alpha can be compared to health: both qualities are desirable to have, but they do not exist in and of themselves. Their presence is characterized by the absence of something. Health is nothing but the absence of injury and disease. One may strive to avoid injuries and diseases, but one cannot acquire health. The same holds for alpha in investing: one may strive to avoid negative alpha, but no pharmacy or investment strategy is able to deliver positive alpha.

This has an impact on the scope of feasible choices for investors. In two follow-up publications we will elaborate on two important consequences:

In these publications, we will also elaborate further on how to avoid alpha. For now, we limit ourselves to concluding that avoiding alpha requires a sincere focus on the beta targeted. Always look before crossing the road, even when we have crossed that particular road a hundred times before.

Get in touch with us

If you have a question or would like to know more about our services, please get in touch with our Investor Relations team.
You can contact us at:

Sign up here to receive our latest insights as well as updates on Transtrend, our trading program and performance. We will treat and process your personal data with care in accordance with our Privacy statement.

Thank you for subscribing! You will shortly receive an e-mail with a link to confirm your subscription.